Before & After Sports - The After

If you read my last post, you'll know what I did in the "Before" to get us to the point of where we are now, the "After."  This is the fun part for me.  When I'm processing the images for my sports pics, I want them to be as perfect as I can make them.  It seems I can always find something to change about them later, no matter how much time I spend on editing in the first place (I'm really never totally satisfied with them).  As I'm editing the pictures though, I sometimes see a different version of the image in my head than what I'm viewing on the screen.   The fun part, is taking an image and trying to creatively edit it, to get it to match what I see in my head.  Does it always work?  Nope, but it sure is fun trying.  Plus, when I can't make it work, I'll look for different options to try and make it work.

That's what happened with this image.  I liked the basic action shot just as I captured it below, but I could already see a different image in my head of something that had more of a "painting" look to it, but I needed to find a way to get there. 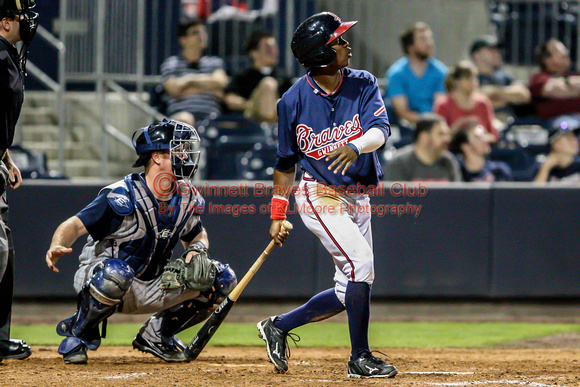 First of all, the beauty of working in Lightroom4 is that it's all non-destructive editing.  That means that you can move the sliders all over the place, but if you don't like what you see, you can just simply click the Reset button or go back some steps in the History.

"Now I'm going to let you in on a little secret," he whispers quietly to not attract unwanted onlookers.  This is a really cool little step to tweaking your images.  It's what I call my "Double-Baked" process.  "Double-Baked" is the term I use when I've worked on an image to bring it to a certain point, then, I'll hit Command-E (on a Mac) or Click on the Photo menu tab on top to open the image for editing in Photoshop.  (My disclaimer: I haven't seen anyone else do this before, but I'm sure I didn't invent this, because there are a lot of really talented artists and photographers out there that know a heck of a lot more than I do.  So saying that, I'm calling it what I want.) 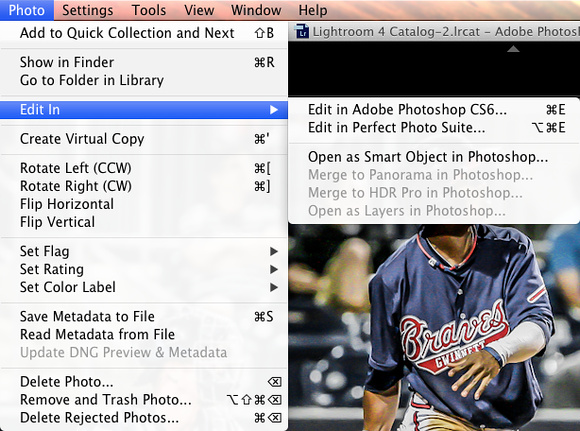 Huh?  Photoshop?  Yep!  I'll open the image in PS with the LR adjustments added.  This gives me the option to use some of the tools in PS to fix a problem area/areas if needed.  Most of the time though, I'll just Click to Save the image exactly how it opened and close it out.

By doing this, it does a couple of things.  First of all, it does give me the opportunity to tweak the image in PS in a way that I can't do in LR, but secondly, it gives me another image in LR with all the tweaks I initially did in the first place.  More importantly, NOW...all the sliders are set at zero so I can tweak it even more than what was originally possible, like bring out more detail in the shadows, knock the highlights down even more, and tweak a whole new spectrum of settings.  Below, you can see how it shows up in the Filmstrip at the bottom of your LR window.

Basically, you're building on top of the work that you did previously with a new image to create a whole other dimension and look to your original image.  This is one of the creative parts that I love about LR.  If I don't like it, I can just Delete the edited image I just created and start again.  Now that I've shown you my "Double-Baked" little secret, what do you do with it?  Well, just like in the "Before" blog, here are my settings under the Basic panel in the Develop Module.

As you can see above, I increased the exposure a little more to compensate for adjusting the Contrast, Highlights, and Whites.  I also opened up the Shadows all the way and pulled back on the Blacks to really bring out even more detail that was hidden in the image, like on the front of the catcher and in the player's uniform.  This let me balance out all of the details across the scene.  Boosting the Clarity also adds to that "painted" look that I liked for this image. Then, I adjusted the colors to bring out or enhance what I wanted to see.  The Orange and Yellow colors will affect the skin tones, so you have to watch what you do to those.  I've also learned that there is a lot of Blue in White, so you can adjust for that affect to suit your taste.

Below is the bottom panel where I applied more Sharpening, added a little more Noise Reduction, and adjusted the Vignetting to darken the edges of the image to focus more of the attention to the center.

Finally, here is my "Double-Baked" (remember...this is a secret) image. 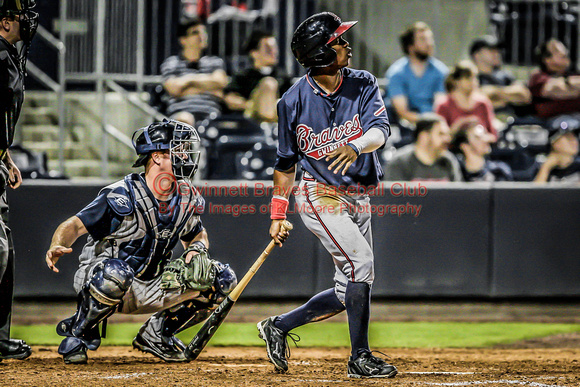 As I've said before, this really is a "season to taste" piece.  This part of the editing works very differently on each individual image.  Some people don't like this look and that's fine too.  It's all a matter of personal taste and what I find enjoyable with the creative process in finding new ways to capture in an image, the vision I see in my head.  So, now we've come to the "After."  Does it end here?  No!  Are there new things to learn still?  Yep! I'm already excited to think about what I'll learn in the next six-months, to see how what I'm doing today, won't be good enough then.  Stay tuned!

MOORESHOTS
All of what I talked about is done in the Development module. You'll need to add PS as an External Editor to LR to utilize the Command-E shortcut key (or alternately go to the Photo tab on the menu bar like in the picture). To do that, go to Preferences, External Editing and add PS. Once there, the settings should be: TIFF, ProPhoto RGB, 8 Bit, 300, None.

What that does is to tell LR that when you open a photo to be used by an external application, then you want it to open the jpg with these settings. In LR3, when I did this, it would automatically add the new file as Filename-edit.tiff right next to the original image (1 of 2). Before it did that though, a dialogue box would appear asking you how you wanted to open the file and I would always click with LR adjustments added. Then it would pop open in PS and I could close it out without touching it and return to LR where the -edit.tiff image was and start working on it there as I mentioned above.
MOORESHOTS
LR3 is just slightly different, but can still function for the most part the same as LR4.
Recovery = Highlights - Increase to bring back the details.
Fill Light = Shadows - Increase to bring out detail in the shadows.
Blacks = Blacks - Increase to add black or leave at 0 to keep it out.
Brightness = Whites - Somewhat, the same.

LR4 changed the way the individual sliders adjust an image. The main difference I noticed was that LR4 was more specific on what area was affected by each individual slider. However, LR3 was/is still a very good program and you'll be able to compensate for the most part for the differences between the two programs.
Dawn(non-registered)
How do I double bake and stay in LR to further enhance a photo. I tried the Command-E in my Mac but it just took me back to the library. I can't figure out how to save the settings and have them start at zero again back in Develop Module.
Dawn(non-registered)
I notice that under your Basic adjustment in LR4 it is different than my LR3... I have exposure, recovery, fill light, blacks, brightness and contrast. Whereas you have Exposure, contrast, highlights, shadows, whites and blacks. Is that because you are using LR4? (I dont have an adjustment for whites.)
No comments posted.
Loading...
Subscribe
RSS
Recent Posts
He Shot_She Shot - Cleburne Style Before & After Sports - The After Before & After Sports - The Before What's Coming Next? He Shot_She Shot The Kitchen: Part 3 The Kitchen: Part 2 The Kitchen: Part 1
Keywords
blog karl moore klmoore photography raw & unedited adobe lightroom photoshop tablet wacom
Archive
January February March April May June July August September October November December
© Mooreshots LLC 2022
User Agreement
Cancel
Continue