OK, here's another installment of He Shot_She Shot - Cleburne Style, where my wife and I set out to spend the day taking pictures together and have a little fun.  On this day, we went to Cleburne, a small town south of Dallas, to see what we could find.  Cleburne is where my Dad grew up and a place that I had been too several times in the past with him.  Of course, that means the first stop HAS to be the depot to see if Amtrak's northbound Texas Eagle had come through.

As luck would have it (and this NEVER happens to me), the train was late, and just as we pulled up, the whistle blew announcing its impending arrival.  I'm thrilled.  I run and grab my camera and try to set up for a shot of the train by the depot.  So, of course, here's my version of what I shot, while my wife is laughing at the sight of me running, trying to turn on my camera, dial-in something remotely close in the settings, and all the while wondering if I'm going to remember to take the lens cap off. 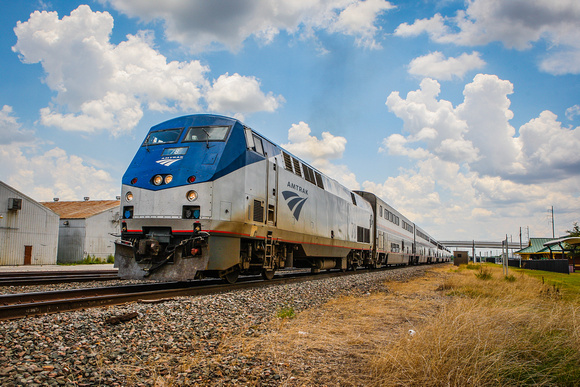 My wife is not really interested in photographing the train.  Her head doesn't "snap-to" attention like mine does at the sound of a train whistle.  So, as I'm out quickly trying to gauge the direction of the sun to compose what will undoubtedly be another "yep, that's a train pic," she's quietly bathing in the luxury of the air-conditioned car shooting this: 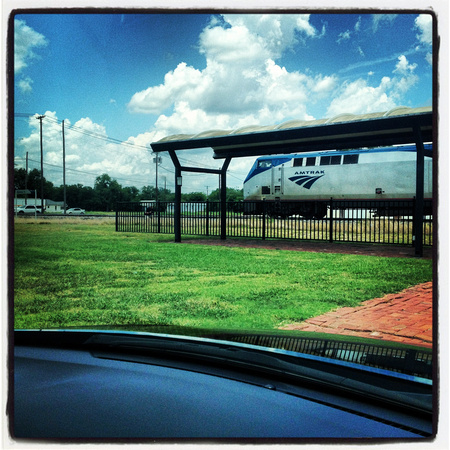 Now, the train is gone and it's off to see what we can find in the old downtown area.  In a matter of just a few minutes, the beautiful blue sky and white clouds that were present at the depot, are replaced by the ominous look of impending storm clouds.  This is OK at first, because sometimes I like the dramatic look that storm clouds can add to a picture.  On the edge of downtown, Stacy spots a neat looking, old, 48' Buick sitting in a used-car lot that will be the perfect subject for our He Shot_She Shot challenge.  Again, for our challenge, we just use our iPhone cameras to take the pictures and then process the images in whatever software we have on our phones before uploading via Instagram.

As we pull up to park, I can already see the money-shot image of the car dancing inside my head.  So, here is my He Shot: 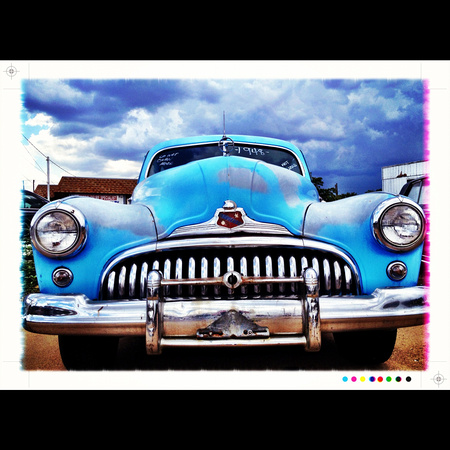 And now, here is her, She Shot: 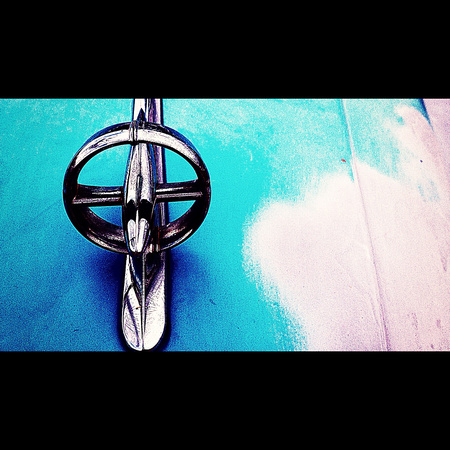 One challenge down, and I think I've got the winner in the first round.  Looking for the next interesting scene/challenge, my wife said she had spotted a wall of tires, at an old tire shop down the street and wanted to go there.  As we pulled up to the tire store, my first thought was, "yep, that's a wall of tires," but the more I looked at it, the more I started to see a pattern in the tires developing.  Here's my He Shot: 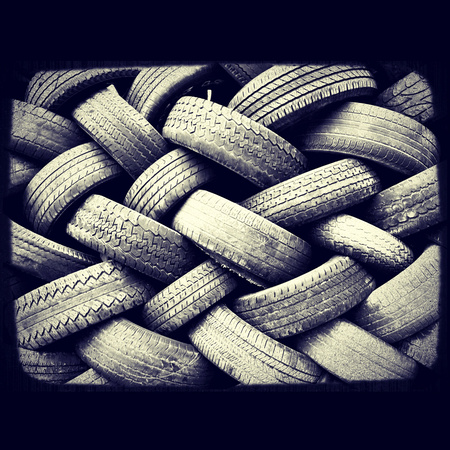 I peeked at her She Shot that she was about to upload and quietly realized that I was potentially going to lose this round.  I liked my shot, but I really liked what she had done with her version.  Here's her She Shot: 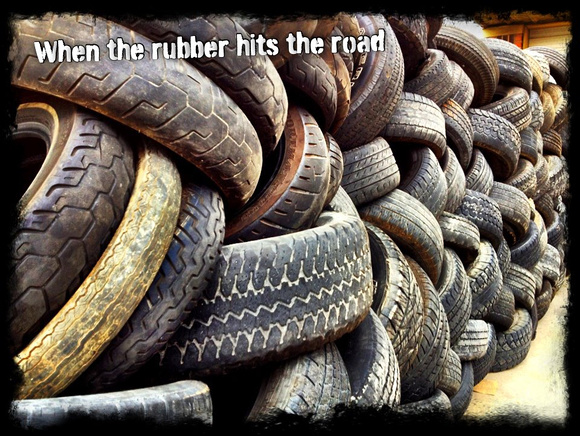 Now, I have to do something drastic.  I was going to lose this round and I'm not happy.  So now, as we're sitting in the car, about ready to leave, I see one more area on the wall of tires that has peaked my interest.  This one's good.  I've got the shot now and I'm pretty happy with my resourcefulness to steal a win and here's my second He Shot: 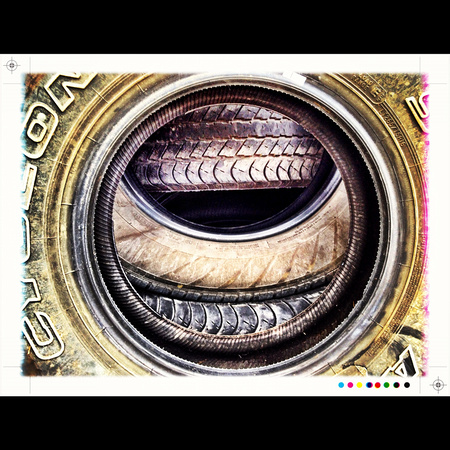 I'm gloating on my shot, as my wife starts to describe the scene directly in front of us, in a way that she thought would make for an interesting image.  I was listening intently to her description of this scene, but I just couldn't quite capture it in my mind to see what she saw.  So, since I had submitted a second image from our tire challenge, I thought it only fair to let her count another image too, since we hadn't left the parking lot of the tire store.  I'm laughing now, holding up the "whatever" sign with my fingers as she's trying to get me to see her scene.  I've got this challenge in the bag.  I told her to go for it and show me this terrific shot.  Ooops, that was a mistake.  What I couldn't see directly in front of me was a very neat image that she saw just sitting in the car.  Dang, my assured win at the tire challenge was now being taken away with her She Shot: 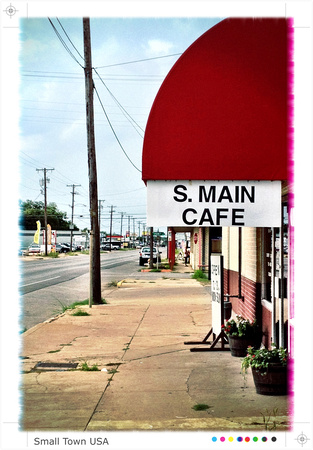 After the tire challenge, the storm clouds were closing in quickly around us and we headed back to the depot for one last look before the rain came.  As we got back to the depot, Amtrak's southbound Texas Eagle was just leaving the depot and I grabbed another couple of shots with this being my favorite of its departure. 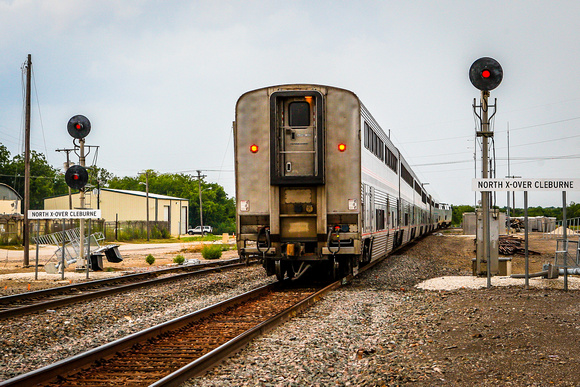 As I'm headed back to car and we start to pull away, I see a pile of tie plates that I think would make for one last challenge.  In accordance with my tendency to see the overall scene, I took this picture for my He Shot: 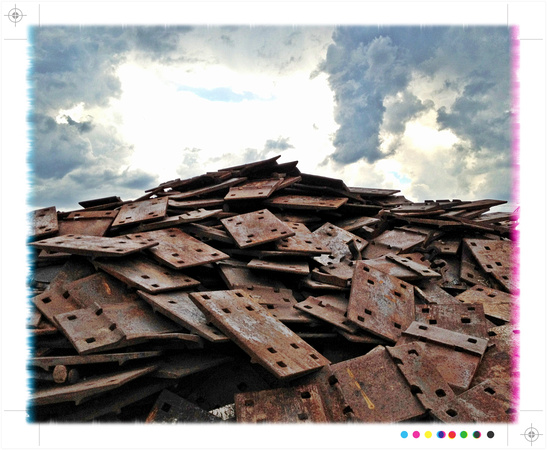 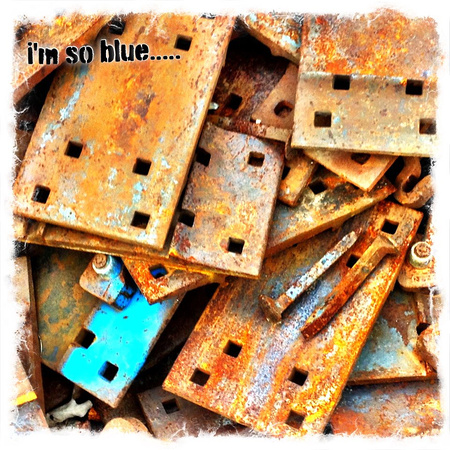 What's fun about our trips together, is that not only do we enjoy spending time with each other and taking pictures, but I really enjoy seeing what she sees in a scene that I am a direct participant in.  She also inspires me to constantly look at things differently instead of approaching a scene from the same way every time.  She ponders for awhile, taking in the little bits and pieces of the puzzle that makes up the overall scene.  I realized today, that I need to "ponder" more, before I start automatically composing the scene in my head like I tend to do all the time.  It's also fun to look back at our journey on the day to see the moments that I shot the big picture while she shot the small details.  That would be typical for us I think, but it's also interesting to see where the reverse occurred too.

MOORESHOTS
Thanks Sherri for the comments. That tire shot is still one of my favorites from the trip and I even went so far as to upload the original image from my phone to work on in Lightroom. That one I like even better.
Sherri(non-registered)
Thanks for taking me on the trip. The tires inside the tire is my favorite.
No comments posted.
Loading...
Subscribe
RSS
Recent Posts
He Shot_She Shot - Cleburne Style Before & After Sports - The After Before & After Sports - The Before What's Coming Next? He Shot_She Shot The Kitchen: Part 3 The Kitchen: Part 2 The Kitchen: Part 1
Keywords
blog karl moore klmoore photography raw & unedited adobe lightroom photoshop tablet wacom
Archive
January February March April May June July August September October November December
© Mooreshots LLC
User Agreement
Cancel
Continue